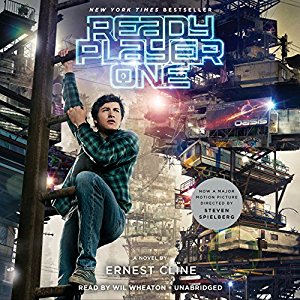 Disclaimer: All Amazon Links are affiliate links. If you purchase any of these books through one of my links I will get a small commission! All the thoughts/opinions in this post are mine and in no way influenced by Amazon.

About a month ago I created a poll asking which Audiobook I should buy.  I got 5 responses to the poll, plus a handful of really great suggestions in the comments.  Here are the results:

Lets start with the Audiobook part.  This was read by Wil Wheaton. I have listened to Audiobooks before but they were always free versions of really old books.  I liked some readers better than others, but none of them compared to Wil Wheaton.  He did such an amazing job! Plus there was a Wil Wheaton reference in the book which made it a fun little Easter Egg.

On a side note, unrelated to Ready Player One, I really liked listening to an audiobook.  I was able to take notes in my bullet journal (I didn’t take great notes but its better than no notes, which I keep forgetting to take any for regular books) I was able to play with my dog, and I was able to color, all while listening to the book! It was really cool 🙂

Now lets talk about the book. I loved it!!

It was chock-full of  80’s references (Apparently its “chock-full” not “chalk full” I have been saying it wrong my whole life #oops) The book did a really good job of explaining the references.  There were only a couple times I zoned out during the explanation or didn’t understand it.

I have heard complaints from other readers about all the references and the long explanations, but I liked them! The explanations were helpful, but if you didn’t really get the reference it didn’t deter from the story.  It was super awesome reading about the references I did understand! One of my favorites was that he originally named his ship Kaylee, from Firefly, because I named my cat Kaylee!!!  Another time I figured our a reference before the narrator figured it out and explained it! I was very proud of myself!

I do want to warn you that one of his references is to the secret about Santa Clause.  He comes right out and says it.  So if you have a child reading this book, that could be bad.  I don’t like it when people tell that secret and risk kids learning about it.  (I’m not even going to say it on here, so hopefully my slightly cryptic message is understood)

The book wasn’t just about the references.  It was also a warning about technology and a coming of age story.  All three elements were woven together so perfectly that you didn’t even notice.  At first all I could think about was the awesome kick ass characters and how great the story was, but after some reflection I realized there was a lot more to it than that, and that was really cool.

I know there is a movie being made, and while I was listening to the book I kept wondering how they would do things in the movie.  I have never really had that happen to me before even though this isn’t the first time I have a read books that was being turned into a movie.  It was actually kind of a cool phenomena.  It made me think of how I picture it in my head normally, but I could also come up with many different ways they could do it in the movie.  I am really excited to see the movie, but there is just so much in this book, I don’t think they will be able to do it justice.

Overall I think is a great book! I wouldn’t recommend it to everyone because it is super nerdy but if you have even a little bit of love for any 80’s music, video games, tv shows, movies, comics, or books, than you might enjoy this too!

Here are some more Wil Wheaton Gifs in case there weren’t enough above!