With all the hype around Endgame and Game of Thrones lately I think it is time we have a serious chat about spoilers.

I know as book bloggers we are super sensitive to spoilers and 99.99% of us would never purposely spoil anything, but there are a lot of other people out there who take pleasure in it.  I know I am preaching to the choir here, but please please please don’t post spoilers without spoiler warnings!!

I saw a GOT spoiler this morning spoiling last night’s episode.  It hasn’t even been 24 hours and the episode was spoiled.  And it wasn’t even by an internet troll.  It was by AOL.

On their home page they have an auto-play video that usually has some current pop culture related content.  I don’t usually pay attention to it but I happened to glance at it and BAM there it was.  The video bar said it was 30 seconds in and I saw maybe 5 seconds but it was enough to spoil the episode.  The title of their video was “Take a look at how the internet is reacting to last night’s battle episode of ‘Game of Thrones'” (and of course the title was below the video) In the video they showed a clip of the show and then showed people’s reaction tweets.  I saw accidentally saw one of the clips and I am pissed.

I was complaining about it to Phil and he told me that someone posted an Endgame spoiler in a YouTube comment because they didn’t like someone else’s comment.  What kind of people do that?  There is absolutely no reason to blatantly spoil it for everyone else.  If you want to talk about it or post about it, then that is fine, but give some warning! Let people decide if they want to know what happens or not!!

I’m part of a facebook group that if you post anything marvel spoiler-ish for 3 weeks after a new movie comes out then you are banned from the group.  I love this policy, but it raises the question: At what point can you assume the majority of the people have seen something?  This applies more for people who want to make memes and gifs and jokes about something, and not necessarily people who want to spoil it for everyone else.  Endgame is full of gems that will make great memes.  The content would be soft spoilers, nothing too detrimental.  Its the kind of content I would love to see, but not till I have seen the movie.  Three weeks is a good amount of time for my FB group because we are all nerds and most of us went and saw Endgame this weekend.  Even the stragglers will probably have seen it by next weekend.  But, how long should you wait before turning a new movie into a meme? (also side note: I love the meme “spoilers without context” that don’t actually spoil anything, but don’t make any sense until you have seen the movie!) 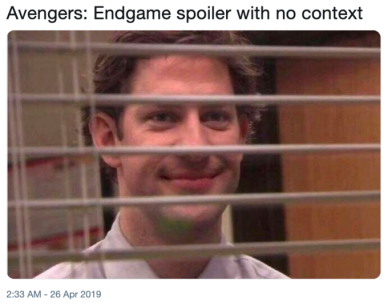 Its kind of the same thing with books.  We all do tags and its not uncommon to see questions asking who is your favorite couple or whose death hit you the hardest.  These are technically spoilers, but at some point we just assume that everyone knows.  Ron and Hermione end up together.  If you would have told me this before I read it I would have been pissed, but I don’t even feel bad saying it here, and I have mentioned it before countless times on my blog.  When does it become ok to say these things?

I realize that sometimes spoilers are accidental, especially among friends.  I almost spoiled GOT for Phil when I was complaining about the spoiler.  I realized too late that I didn’t actually know if he had seen the episode yet! I just assumed he had because he is a huge GOTs fan.  Thank GOD he had seen it.  But it just shows that it happens.

There are times where spoiling things is ok.  For example, I have no desire to ever see The Strangers, but my friends were all talking about it because they thought it was awesome.  They wanted to go in depth and talk about the movie, but were willing to refrain because I had never seen it.  I told them to go ahead.  I was curious to know what happened anyway, but knew I would never watch it.  They gave me a summary that included spoilers and it was all good.

Also, like I mentioned before, it is ok to post spoilers, just make sure that people know the spoiler is coming and give them ways to avoid it.  A video that auto-plays is unavoidable.  Don’t do that!  You can post, just be super careful and courteous!!

What is the worst thing you have ever had spoiled (don’t tell me the actual spoiler, just the show/episode/movie/book title)?  What do you think about spoilers?  Do you agree that people that purposefully spoil huge plot points are the scum of the internet? Let’s discuss!